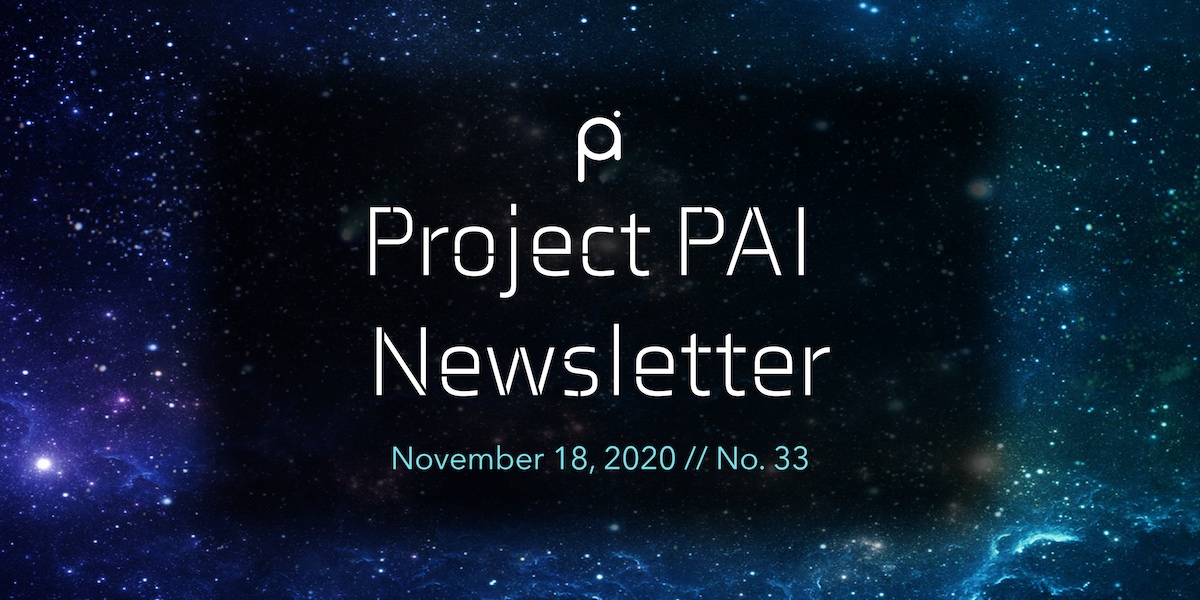 If you are running a full node, solo staking, and/or solo mining, you must immediately update to 2.1.0.

To update, execute the following commands in the paicoin directory of your full node.

For ALL solo stakers: Make sure your node is online and voting!

Execute this script on your staking node.

Check out this information about the recent transition to Hybrid Consensus:

PAI Countdown has been updated to countdown to the first block reward halving. Check it out!

Staking on PAI Coin Pool works via a mechanism called Staking By Proxy. Staking By Proxy functions by pooling together all staked user funds in order to purchase more and higher-valued stake vouchers on the PAI Blockchain. Rewards are then distributed among stakers proportional to the amount their stake contributed to the pool. This mechanism is particularly beneficial for users who may not own enough PAI to purchase at least one stake voucher on their own, e.g., because the stake voucher price is too high. On the other hand, when the stake voucher price is low, there is little advantage to having a large pool of funds, since, by rule, the total number of stake vouchers that can be purchased across the entire network is limited to 20. So, as the stake voucher price increases, the advantages (and reward amounts) associated with PCP staking will increase substantially. Let’s take a deeper look by example.

Imagine that the following individuals have decided to either solo stake or stake their PAI Coin on PCP in the specified amounts.

Note that this is equivalent to the following table, because all of the stakers on PAI Coin Pool effectively form one single PCP staker.

So, at an SV price point of 2 PAI, what happens in the above scenario of the 5 HODLers: Alice, Bob, Carol, Charlie, and PCP? First, let’s remember, the price of one SV is 2 PAI Coin, and as always, the total number of SVs that can be purchased by anyone and everyone combined across the entire network is 20. This means that:

It follows then, that at this low of a price per SV, there is little advantage to owning a substantial amount of PAI Coin, because the maximum amount the network will allow you to stake in this scenario is very low. While it may be counterintuitive, in this case, the 20 available stake vouchers per block will be split evenly among the 5 stakeholders, Alice, Bob, Carol, Charlie, and PCP; and this is despite the fact that PCP holds 200 times the amount of PAI Coin as the next richest staker. This situation, however, is very temporary.

Since the launch of Hybrid Consensus, the stake voucher price has increased from the initial 2 PAI to its current price (as of writing) of approximately 12,684 PAI per SV. As shown in the charts below, the SV price began to exponentially increase around block height 158,000, when the number of live stake vouchers approached the target of 40,960. At the current price of 12,684 PAI per SV, then, the minimum amount of PAI Coin that any one individual can stake per block is 12,684 PAI, and the total amount of PAI Coin that can be staked per block by anyone and everyone combined is 253,680 PAI. Reconsidering our HODLers, we see that Alice, Bob, and Carol are all now unable to afford solo staking, so the 20 SVs available per block would be split between Charlie and PAI Coin Pool only. 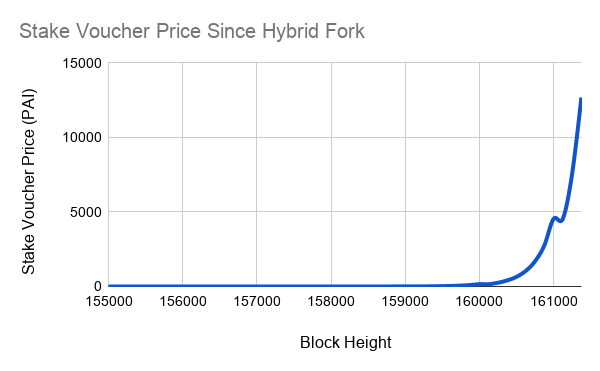 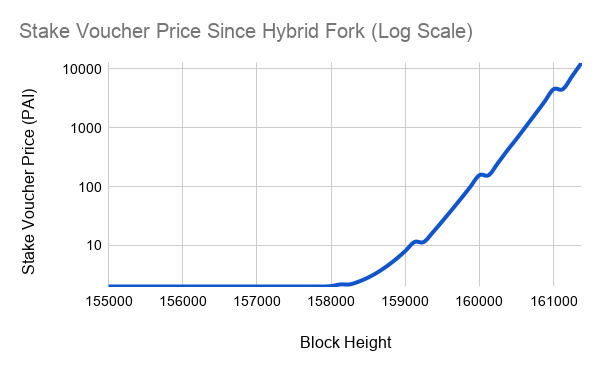 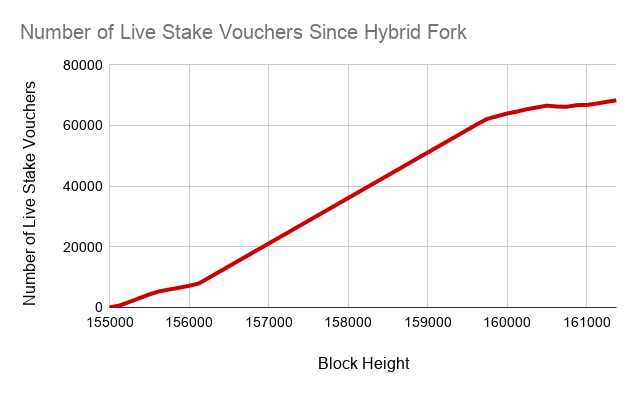 As time goes on, and PAI Coin Pool is able to accumulate more and more stake vouchers relative to other participants (helped in large part by the increasing price of a voucher), the corresponding magnitude of the rewards distributed among PCP stakers will increase. The timing of when and by how much the rewards will increase is difficult to predict, but as you can see by the chart above, the price of a single stake voucher is now increasing exponentially.

In the hypothetical scenario above, once the SV price exceeds 100,000 PAI, no network participants other than PCP will be able to afford to purchase stake vouchers, and all 20 of them, per block, would be allocated to PCP. Further, with a purchasing power of 100 million PAI, PCP could continue to purchase stake vouchers of increasingly higher value, rendering it more and more difficult for other stakers to be able to afford to participate independently. It is at this point that the advantages and profitability of PCP staking will be realized.

How to connect PAI Up Mobile to a specific node

Follow these instructions if you are unable to sync PAI Up or if your PAI Wallet still displays incorrect data after a sync.

Traditional apps, like WeChat, connect to a central server to retrieve and upload new data like incoming and outgoing messages, or new Moments from other users. PAI Up doesn’t work like that. Since the PAI Blockchain is a decentralized peer-to-peer network, there is no central server. But every PAI Coin Full Node acts like a central server, and when you launch PAI Up, the app has to choose—basically, at random—which Full Node to connect to.

Now, take note of the “Current Primary Node,” then choose “Switch to Manual Mode.” From there, enter one of the following nodes (one that doesn’t match the Current Primary Node from the previous screen) in the top field and choose “OK.” You can enter either the URL or the IP address directly. Then, make sure the “Node Connection Status” shows “Connected.” If it doesn’t, or if it oscillates between “Connected” and “Connecting,” choose a different node from the list below and repeat the process.

If these tips still don’t work, try uninstalling and reinstalling PAI Up. 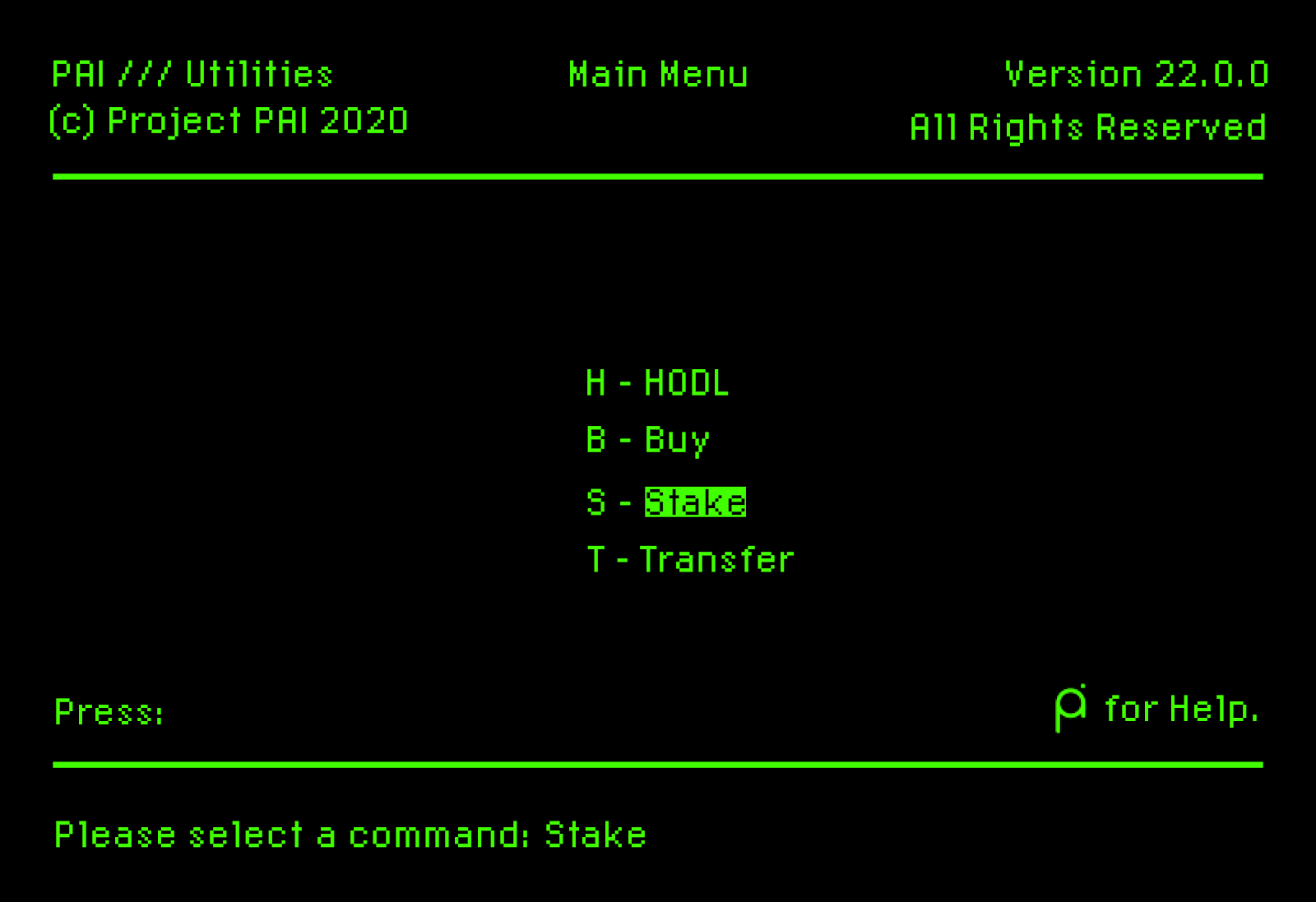