How will Hybrid Consensus be launched? 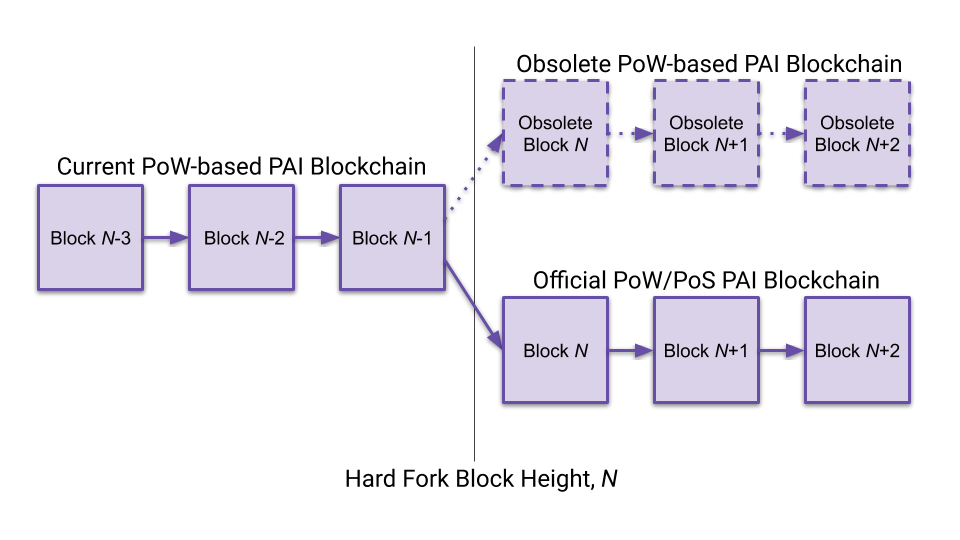 Hybrid Consensus is a fundamental change to the PAI Coin protocol. It changes the basic rules by which transactions are verified. This change is not backwards compatible, and therefore, requires what’s called a hard fork of the blockchain. At a pre-specified block height, which is yet to be determined, all peers that have updated to the new version of PAI Coin Core will reject candidate blocks which do not conform to the Hybrid Consensus protocol.

Once Hybrid Consensus is launched, how will mining and staking work? Is any equipment needed for mining?

Following the launch of Hybrid Consensus, users will have two options to mine and stake:

In either case, you shouldn’t need any special equipment to participate.

PAI Coin Pool will be updated to mine on-chain, so that mining will be as simple as it is now — download the PAI Miner application and run it on your computer. The only difference will be that the Lucky Hashes your miner submits will be used to construct valid candidate blocks for addition to the PAI Blockchain.

Regardless of whether or not you specifically generate the block that becomes part of the blockchain, all participating PCP miners will be rewarded with a proportional fraction of the block reward whenever PAI Coin Pool, as a whole, finds a block. Smaller, but more frequent, block rewards are the main benefit of participating in a pool versus solo mining directly.

If you still prefer to try your hand at solo mining, you would do so by cloning and compiling the open-source PAI Coin Core software that will be available on the Project PAI GitHub.

Can big mining companies with a lot of ASICs take over the network?

No, the PoW/PoS Hybrid Consensus mechanism uses a SHA-3 hash function. An ASIC that computes SHA-3 does not exist, to our knowledge (although one could theoretically be built). That levels the playing field and allows regular users to fairly participate in mining using standard computing equipment.

Here’s a snapshot of some of the commits / PRs by our developers last week: